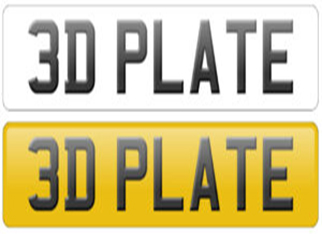 
The first thing I want to make clear is there’s no need to panic at the title of this article. If you have 3D number plates on your vehicle you are not necessarily going to get a fine. What we’re going to be looking at here are changes to the rules around UK registration plates that came into force from 1 September 2021 as the new 71 plate starting being used.

Several different types of registration plate designs get called ‘3D’, but only one particular design is being outlawed. And even if the registration plates on your vehicle are the ones that are no longer going to be allowed, you won’t have to worry if they were made before 1 September 2021.

Which plates are affected?

The plates that are no longer legal on vehicles in the UK if they were made from the start of September onwards are ones that use two different shades of black for the characters to create a 3D look. From September 2021 it is illegal to use a two-tone effect to create the illusion of three-dimensional characters, but there’s no change to the law regarding actual 3D and 4D number plates. This new rule is only concerned with flat, printed characters on number plates and not the actual raised characters on 3D gel and 4D plates.

However, you don’t have to rush out and replace your existing plates if they are the type that is now being outlawed, as long as they were made before 1 September. Even if you have a vehicle that was registered in August on a 21 plate and you chose plates with the two-tone, simulated 3D characters they are still legal and you will not be liable for a fine.

Why has the law changed?

To put it bluntly, the new number plate laws for the UK are largely designed to make it easier for you to get caught by those lovely ANPR cameras. You see, the shading effect used by these ‘3D’ registration plates makes it harder for ANPR cameras to distinguish the characters from the background. And of course, we wouldn’t want anyone getting away with speeding, parking in the wrong place, or putting part of a tyre on the white line that marks the start of a bus lane at the wrong time of day, would we?

The new standard goes by the catchy name of BS AU 145e and there’s a little more to it than just outlawing two-tone plate designs. The new standard also covers what the plates are made from and how they are made, and new plates now have to be able to pass an abrasion test that proves they are durable enough to withstand damage from road debris such as salt and grit.

Even before the new standard came into force there were pretty stringent rules governing what could and couldn’t be done with registration plate designs for vehicles on UK roads. The exiting rules clearly stated the mandated background colours of the front and rear plates as well as the font, size and spacing of the characters. If you’ll pardon the pun, there was a bit of a ‘grey area’ where the colour of the characters was concerned as it just said they had to be black and didn’t say that two different shades of black couldn’t be used. Like most areas of life, if there’s a loophole somewhere you can be sure that someone will find it, and that’s what happened with these so-called 3D number plates.

The good news for anyone who wants a number plate with a little more style and flair than the standard flat, printed design is that true 3D and 4D number plates are not affected by the new standard. The 3D gel plates that have raised, domed characters are still perfectly okay as long as they follow the existing standards covering fonts, character sizes and spacing. And it’s the same story with 4D number plates that have characters cut out of a sheet of acrylic and usually stand proud from the plate itself by up to around four or five millimetres.

Other changes from September 1st

There are a few other changes you might need to know about that came in with the new standard for UK number plates, and although they are relatively minor, there are sure to still be some people who will not be happy for one reason or another.

New UK plates will now be mandated to display the name, address and postcode of the supplier and manufacturer as well as the new BS AU 145e British Standard mark. There are also changes to the country markings found on the side of number plates that show what country the vehicle is from and remove the requirement to have to display a separate sticker on the vehicle to be allowed to drive in Europe.

Before we left the EU, British registration plates had the letters GB underneath a circle of stars on the left-hand side, and they could also feature the St George’s Cross, Saltire or Red Dragon of Wales. Once we left the EU, this changed to the GB letters being displayed under a Union Flag, and only vehicles with this type of plate were allowed to drive on the continent without having to have one of those large black and white GB stickers on the back.

This is going to change once again and GB will be replaced by UK from 28th September 2021 to now include Northern Ireland. If you think about it, it was a bit of an oversight to have GB on plates instead of UK as Northern Ireland isn’t part of Great Britain but is part of the UK, but you can be sure there’ll be some people that will have a problem with it.

You may also be starting to see number plates with a green strip down the left-hand side, but this was introduced in December 2020 to show an electric vehicle that puts out zero emissions. The idea is that these vehicles can then take advantage of incentives such as free parking and free access to clean air zones, but these plates are optional and if a driver doesn’t want to have one they can have a regular number plate on their EV instead.