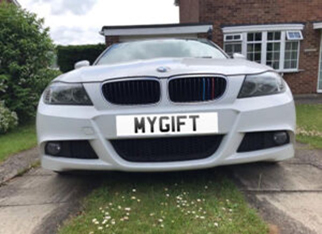 
I’ve always prided myself on being pretty good at buying presents, and by that, I don’t mean I know the best time to shop for presents to get in and out of the shop in the least amount of time and by spending the least amount possible. What I mean is I like to put plenty of thought into buying gifts to make sure they are personal to the person I’m buying for, that they will like them, and that they are something others probably haven’t thought of buying for them. However, until relatively recently, even I’d never thought about buying someone a personalised registration plate for Christmas or any other occasion for that matter. 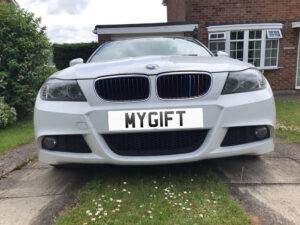 Do you know that some people don’t particularly like getting presents? I know I’m not a big fan, but that’s because my hobbies and interests have always been pretty costly or quite specialised. Nobody who might be likely to buy me a present is going to buy me scuba diving gear, an electric guitar, a motorcycle, a car or a trans-Atlantic flight. Of course, there are plenty of relatively inexpensive items related to those hobbies and interests, but how would someone without specialist knowledge know what to buy or whether I already had it or not?

They could, of course, ask me. But I have a big problem with that sort of thing because my wife’s family has always done that horrible thing of asking each other what they want for their birthday or for Christmas. For me, this goes against the whole point of buying people presents, which is to show you care for them and know them by buying them something thoughtful you know they’re going to like.

So, if you have someone special you want to buy a meaningful present for and you’re short of ideas, a personalised number plate is a fantastic option for so many good reasons. 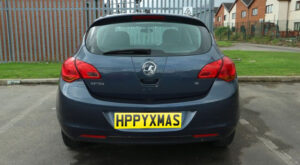 Is it hard to buy a registration plate as a present?

Buying someone a personalised registration number, or even the number and the physical plates is as easy or even easier in some cases than buying someone an item of clothing. All you have to do is go online and search for a number that has some significance, put it in the shopping cart and pay for it. You’ll then get a confirmation email and the DVLA certificate will be sent to you in the post. If you want to buy the physical plates as well, the process is just as simple and you can have them made up and sent out by next day delivery as long as you order them early enough in the day.

And if you’re one of those people who leave it until the very last minute (or even later) to buy your presents, a registration number can even be bought on Christmas morning if you find yourself in the position of waking up to realise you’ve forgotten to buy a present for someone important.

While we’ve always been able to buy personalised registrations as presents, not so very long ago the process was so laborious and complicated that most people would never have considered it. Now, however, with the whole process now being available online, buying a personalised registration number for someone as a gift is easier and quicker than buying a pair of socks.

How much does a personalised plate cost?

At this point, we need to make a distinction between physical number plates and a personalised registration. You can go online or down to an authorised high-street shop and get a set of physical number plates made up as long as you have the relevant supporting documentation to show that number is yours to use. As I said, if you’re buying a personalised registration for someone as a present you may want to buy them the physical plates as well, but what we’re really talking about here is the actual registration number.

If you’re just looking for a nondescript number that doesn’t give away the true age of a vehicle you can sometimes pick up a bargain plate from a dealer for as little as it costs to buy a set of physical number plates. On the other hand, if you’re looking for a number that’s a little more desirable or significant to the person that you’re buying for then you’re going to have to dig a little bit deeper I’m afraid.

I recently bought a number for myself and it was one that hadn’t been used before so it was pretty cheap. My number is a prefix plate, which was the system used between 1 August 1983 and 31 August 2001. It consists of one letter followed by two numbers and then a group of three letters. This six-character number means something to me and there’s no way anyone can tell how old my new vehicle is by looking at the registration number.

That number cost me £170 (including VAT) and a further £80 for the assignment fee so I could allocate it to my car as soon as I wanted to. This is about the minimum price you’ll have to pay for a personalised registration number, but I can certainly imagine how I would have felt if my wife or someone else had the inspiration and inclination to buy it for me as a present. I’d have been absolutely delighted as well as seriously impressed at their thought and imagination.

Of course, you can spend anywhere from a couple of hundred quid to the price of a very nice family home, or anything in between, for a private registration number. But I’d say this is one of those cases where it really is the thought that counts. And let’s be honest, if you present some with something as original as a personalised registration plate as a gift do you really think they’re going to be giving much thought to how much or how little you paid for it?