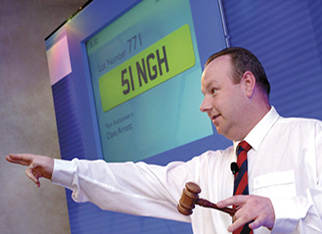 All You Need to Know About DVLA Auctions


If you’ve ever looked into buying a personal number plate, you’re probably aware that the DVLA sells them direct to the consumer through fixed-price sales and auctions. The two types of auction used by the DVLA are called the Venue Auction and the Timed Online Auction, and in this guide, I’m going to explain all you need to know about DVLA auctions 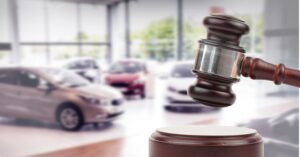 How Does a DVLA Venue Auction Work?

As the name probably suggests, a DVLA Venue Auction is one that’s held at a physical venue where people are allowed to attend and bid on registration numbers in person. The locations of these auctions do vary, but every event is advertised well in advance and the whole thing has the look and the feel of a traditional auction you’d attend to buy cars, horses, antiques or anything else for that matter.

Whichever registration numbers are due to be auctioned off by the DVLA at a particular auction will also be advertised well in advance of that sale along with an auction calendar you will be able to find on the DVLA’s website. If you’ve ever attended or watched a normal auction before you probably know what to expect. Anyone who intends to bid on a number needs to register in advance of the sale to be able to bid on the lots they are interested in when they eventually come up.

At this type of live auction, it’s still expected and even encouraged fin normal times for bidders to attend and bid in person. But like most other auctions, there are also facilities for bids to be placed online or even by the old-fashioned medium of the telephone. For specific details of any auction being held, the DVLA helpfully issues tutorials on how that auction is being conducted.

I will hold my hand up here and now and admit I’d enjoy an auction even if they were only selling off buckets of dirt. Car auctions are my favourite auctions, of course, but any auction is an exciting and often enthralling event whether you’re a bidding participant or just a casual observer. One word of warning though. It’s incredibly easy to get carried away bidding on things at an auction so you have to set yourself a limit and stick to it. It’s almost as easy to bid too much at a venue auction as it is to bid on and win something eBay on a Saturday night after a visit to the pub that you don’t really want or need when you find you’re the winning bidder on Sunday morning!

About all a DVLA Timed Auction has in common with a DVLA Venue Auction is the fact that number plates being are being sold and they will end up with the highest bidder. Apart from that glaring similarity, it’s hard to think how these two types of auctions could possibly be much more different from each other.

Perhaps the biggest difference is that a DVLA Timed Auction has no physical auction venue for you to attend at all. There’s no mix of physical bidding, online bidding and telephone bidding as you have at a venue auction; the entire auction is conducted exclusively online. Even though there is an element of live bidding once underway, the prices don’t leap up in large increments as you might see with a more traditional auction. At regular auctions, it’s not uncommon for a bidder to try and intimidate others into being put off bidding scaring them away with a large bid.

At a DVLA Timed Auction, however, the latest price goes up in £10 increments until the maximum bid is reached. Bidders submit a bid of the maximum amount they are prepared to pay for a number, but if the highest bid goes higher than their maximum bid, they then get sent a text message or email letting them know they’ve been outbid and offering them the chance to increase their bid if that’s what they’d like to do.

Anyone with some experience of bidding in online auctions such as on eBay will probably at some point have come across the practice of “sniping,” but a big feature and attribute of DVLA Timed Auctions is they employ what are known as “Sliding End Times” to eradicate sniping.

Sniping is the use of specialised software that automatically bids in online auctions for you incredibly quickly in the last few seconds of the sale to prevent other bidders from having any time to react and outbid them. Imagine an item you are watching is stuck on a bid of £150 for a couple of days, but in the last 30 seconds or so, a large number of extremely rapid bids push it up to a more realistic £500. It’s almost certain in those circumstances that multiple bidders are using sniping software and human bidders like you have no chance of reacting fast enough. The only way you can win is to place a higher maximum bid than they are prepared to go to, which would probably mean you end up paying far more than the item is worth.

Sliding End Times are where the end of an auction is still set for a certain time, but any bidding in the final 30 minutes triggers an additional 30 minutes of “extra time”. Theoretically, auctions with sliding end times could go on forever. But realistically, all auctions end when the price reaches an amount where nobody thinks it’s worth bidding higher.

You can place a bid as high as you like on any number plates that you’re interested in buying, but bids have to be placed in increments of £10 and bids with pence in them will not be accepted. The current highest bid will be displayed throughout the auction, but nobody bidding in the auction can see what the maximum bids of others are.

Starting prices are set at the absolute minimum amount the DVLA considers that particular registration number to be worth. But please keep in mind that the current bidding prices don’t include VAT, the buyer’s premium which is also subject to VAT, or the assignment fee that allows you to allocate the number to a vehicle. If you’re not sure what a reasonable price is for the number you are interested in, the DVLA’s auction sold facility on its website allows you to look up similar numbers that have been sold previously to get an idea. 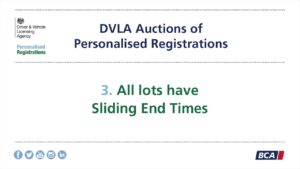 Are there bargains to be had at DVLA auctions?

There are some auctions where you can find a hidden gem and grab yourself an absolute bargain, but I’m afraid the chances of you finding one of these at a DVLA auction are slim, to say the least. The DVLA has access to all the online data about sold plates and prices and so do licence plate dealers, so most plates go for what they’re worth and the only time this isn’t the case is when two buyers with loads of money both want the same plate and don’t care how much it costs.

If you are successful in winning an auction you have to pay the final selling price as well as all related fees within five working days. If a plate that’s put up for sale doesn’t receive a bid at the starting price it will be declared “unsold” when the auction ends and it will probably be put up for sale in another auction at a later date.